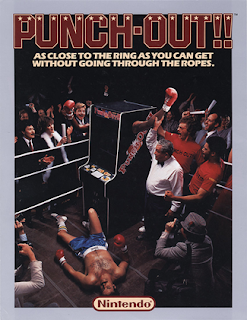 Long before Punch-Out!! on NES, there was the original game of the same name for arcades. It was also one of the earliest games Nintendo ever made. It may not be as realistic as Nintendo claimed, but come on for 1984 what can you expect? 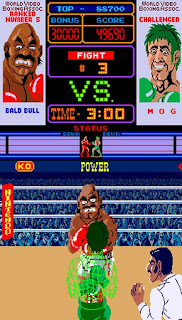 The game had a lot in common with it's future sequel on NES, but actually featured a more zoomed view similar to Super Punchout on SNES. A lot of the old favorites were there as well, and you had to learn their moves and get the KO. 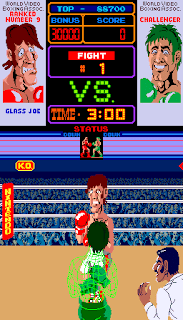 The original arcade game was well recieved at the time, and still has it's fair share of fans today. This is sadly one game that never got remade or ported to any console or handheld. With the retro services on Wii, WiiU, and 3DS it'd be a shame if Punchout!! never made it on any of them in the future.
Posted by Adam at 9:55 PM

Email ThisBlogThis!Share to TwitterShare to FacebookShare to Pinterest
Labels: A Look Into Video Games, Nintendo, punchout

I was never any good at those games. :(

this is quite a funny game