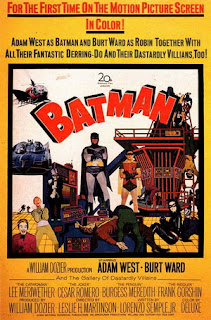 Even though the TV series came out over 20 years before I was born, I do remember watching the re-runs on TV as a kid. It may of been the first adaptation of Batman I've ever seen. I don't think I saw the 1966 film as a kid, and thus the only major film based on the Dark Knight I hadn't seen before. So I had to give it a watch, even if was for a laugh or two. 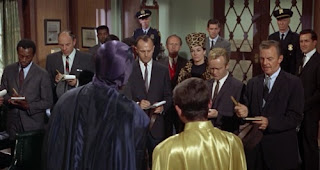 For those who don't know about Adam West's version of Batman is that the whole universe is goofy and non-serious. For example, in this version of Gotham City Batman and Robin work side by side with the police and are public heroes revered by all. The movie starts off with the dynamic duo search for a missing yacht which vanishes after Batman spots it at sea. 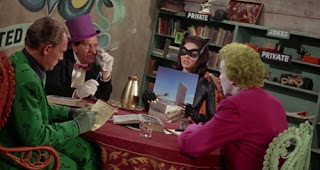 The find out that the Commodore of the yacht has been taken prisoner by not only Joker, but Catwoman, Riddler, and Penguin. Then they try various schemes to either defeat Batman or take over the world. One includes an attempt to capture millionaire Bruce Wayne to be bait in order to lure Batman into a trap. 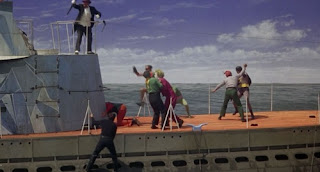 The one thing you must realize is this is not anything like the recent Batman films, or even the Batman films in the 90's. Its goofy humor, nonsensical plot, and memorable characters are not for everybody. Fans of the TV series will dig it, but I doubt the newer generations of Batman fans will like it. Overall I enjoyed it, but it doesn't hold a candle to either Tim Burton's or Christoper Nolan's Batman films.
Posted by Adam at 3:50 PM

Many things have changed in these decades.

Yeah it was a fun watch, but that's about it.

I've heard that it's slightly ridiculous in the best of ways. Never had an opportunity to see it myself though.

Oh dear, I don't see any other reason to watch this besides the entertainment value of its ridiculousness.
Those costumes, OMG. I guess this is what was average for that time though.