Fact of the Day: Fear of Oceans 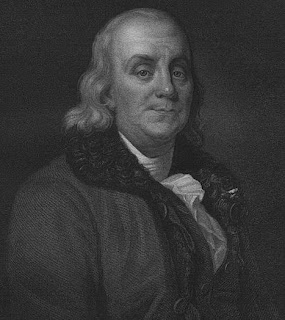 Ben Franklin spent many years in Europe way before his role as Minister to Sweden, and Minister to France. His wife Deborah Read Franklin was afraid of ocean travel, so she chose to remain in America. She claimed her illness was due to his absence. She died of a stroke in 1774 while Franklin was in England.
Posted by Adam at 12:19 AM

Email ThisBlogThis!Share to TwitterShare to FacebookShare to Pinterest
Labels: Ben Franklin, fact of the day

He is quite an interesting character!

Hmm? She should have been more afraid of dying alone without her husband. And that's my motto...don't let fear rule your life.

afraid of the ocean travel huh
too bad for her

Yeah fear can sure be a fickle thing, too bad she didn't realize that.

My wife always says she'd truly die without me, and sometimes I think she means it. Can't tell if creeped out or flattered.

Never knew that, thank you for sharing. The sea is quite a mystery...it is so beautiful but quite unpredictable indeed!

Yeah, I'm thinking a fear of ocean travel was kind of a bummer 129 years before the airplane was invented.