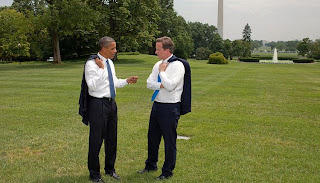 I know a decent amount about British history and politics, and I'm really surprised by this Conservative Prime Minister of the United Kingdom. He's taken a great friendship to President Obama, and he's so much closer to the center than Margaret Thatcher. Well despite being part of Britain's main center-right party, the House of Commons under his leadership passed a bill legalizing same-sex marriage 400 votes to 175 nays. I'm not an expert on British law, but I'm sure the bill also has to pass in their House of Lords too. Though I have to give my respect to the government of Great Britain for standing up for equality.
Posted by Adam at 10:28 PM

it makes me think that they have a different definition of conservative. i wish those in usa would adopt those policies. sigh.

well his party made up most of those 175 nays. A bit of a civil war going on over there too within their party.

good for them. i wasn't surprised though.