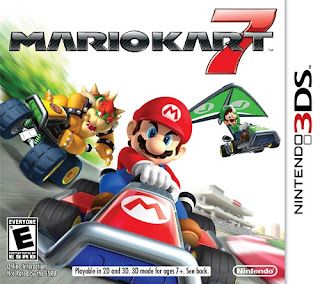 I have been a big fan of the Mario Kart games since the original title on SNES. I spent many days playing Mario Kart: Double Dash with my brother in very bitter matches. And Mario Kart DS was the very first game I ever played online. So when I got my 3DS, Mario Kart 7 was an easy choice. 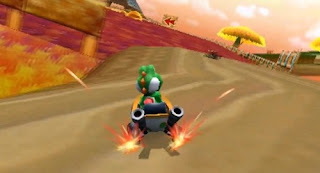 But being the seventh (not counting the two arcade Mario Karts) title in the series leaves a bit of a problem. The series can be a little stale to some. While it features 16 new tracks, 16 retro tracks, and different ways to upgrade your go-kart; all that just isn't enough to spice up the formula. 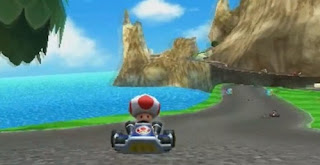 Granted I actually do enjoy the new tracks a lot, and I was thankful to see my old favorites reappear in the plentiful retro courses. Also for the first time since the original game, I actually enjoyed the battle mode. I also liked how they improved on the online play since Mario Kart DS. Everything runs rather smooth, and they making waiting for a match a little easier. I also liked how they show you the location of all other players in a match on the giant globe before the race starts. 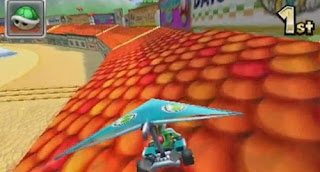 Don't get me wrong, I think Mario Kart 7 is a great game. But honestly, I felt as thrilled about this new game as I did with Mario Kart Wii. I will keep playing the series, but a major overhaul should be implemented in the next sequel in order for the series to stay king. Though I am a veteran player, if you're rather new to the series then it could be a different story.

I bought the Wii version of this for my son this last night. I hope he likes it.

Haha I have a really old pink DS and I love to play games like that on plane flights and stuff!

Thank you for your comment, skiing is really fun! You should try it sometime :)

Haven't played Mario Kart in years and probably won't get this one, but loved the game, who wouldn't? Thanks for the review about this one!

yeah there isn't a ton they can do to really make it fresh for those of us who have played it since the start, last one I really enjoyed was the gamecube one.

Haven't played this one or the one for the Wii.

Haven't really played a Mario Kart since the GameCube version. I did a race or two on the Wii, but it got a little old. I might get this version to try it out at least.

just get him a controller that isn't the regular motion one. The wiimote and nunchuck works okay with it.

the last one I loved was Mario Kart DS. But double dash was awesome