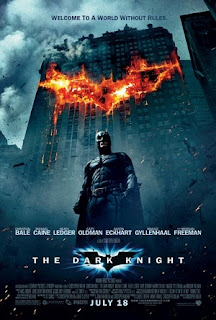 In 2008 I had never seen Batman Begins (though I saw it later) but I was really hyped up for the sequel The Dark Knight. It was really hard to believe the super-excitement over the film. I think I saw it for my birthday in theaters while it was still fresh.

At the time, I didn't know any of the exclusive back-story established in Batman Begins. But c'mon? It's not hard to put the pieces together. Bale plays a great Batman, but I think he played the best Bruce Wayne of all time.

I also liked the trio-team of Batman, Jim Gordon, and Harvey Dent. Seeing all sides of justice working together was pretty neat. I also thought the process of Harvey Dent becoming Two-Face both physically and mentally was for more realistic than his comic counterpart.

And Heath Ledger just stole the show with his role as the Joker. Though he wasn't as clownish as Joker usually appears, he did earn the Oscar for best supporting actor. Might not sound too impressive, but the Oscars usually ignore comic book movies regardless of quality or popularity. It was such a shame Ledger died before he could receive his award. 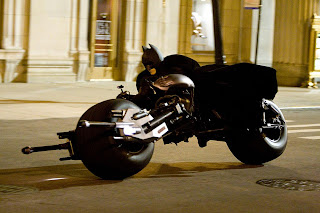 But even though the Dark Knight Rises was a fantastic film, I still think The Dark Knight is the better film. It's my favorite Batman film of all time, and it will be hard to top.
Posted by Adam at 5:12 PM

Yeah the second is surely the best of the three, agree with thee.

Yes, it was superior to Dark Knight Rises primarily because of Heath Ledger. But, I liked how DKR manages to wrap things up and I also liked the tie-in to Batman Begins (i.e., League of Shadows). Outstanding trilogy and far better than Batman, Batman Returns, Batman Forever, and (Lord help us) Batman and Robin.

I've yet to see this movie from start to finish; usually just see bits of it if hubby or son are viewing it. I want to say I saw a Batman movie years ago that Michael Keaton was Batman???

he was in the 1989 Batman, and it's sequel Batman Returns.