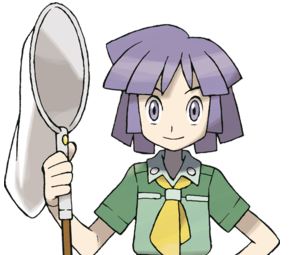 Bugsy is the 2nd gym leader in the Johto Region in the 2nd generation of Pokemon games (Gold,Silver, Crystal) as the leader of the Azalea Gym. His specializes in bug-type pokemon, which is true to his namesake. Except he is one of the easiest gym leaders in the game. He's only got 3 pokemon, two of which are Metapod and Kakuna which don't have much of an offense. The only thing to worry about is a moderately powerful Scyther who isn't terribly difficult.
Posted by Adam at 12:00 PM

So...I don't mean to offend Bugsy, but is he a he and not a she? I guess pre-puberty, we all look alike.

Is Pokemon still around? Wow! I remember the craze when it first started. Can't believe it's held it's luster this long!

Yeah he was rather easy to beat.

yeah Bugsy is a boy, I thought the same thing

bugsy- bug tyoe? haha i don't get it haha JK