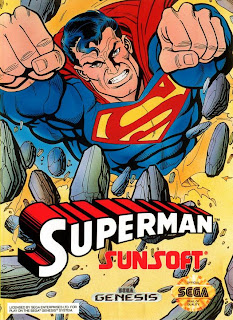 The early 90's were a golden age for video games, and DC wanted to give the Superman a shot on the Sega Genesis. So Sunsoft made a platformer in 1992 starring the Man of Steel. 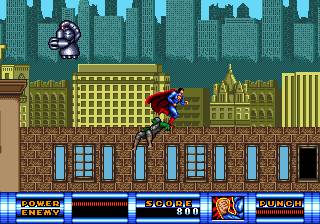 Some gamers say it was rather silly for Superman on Genesis to be a platformer as he can fly. Though I guess they couldn't complain during the flying parts of Superman on N64. What was worth complaining about is that Superman was limited to simple jumps and punches and his super-powers were rarely seen. 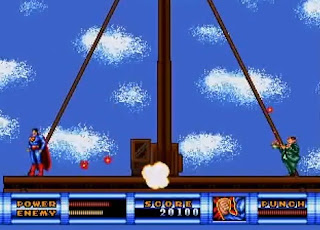 The game also featured little to no story at all. Of all the Superman story-lines out at the time, they dumbed it down to "Superman vs bad guys" in a sense. Though a later game on SNES and Genesis would be based on an excellent and then-current comic book story-line. 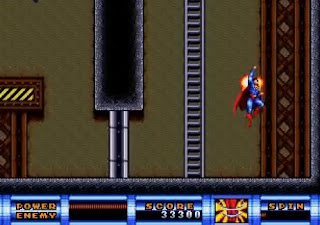 The game was met with negative reviews, and impressed very few super-fans. While the graphics and sound were decent for the Genesis, the limited game-play and lackluster stages were Superman's kryptonite. While it wasn't Clark Kent's worst game, it was easily forgotten in the realm of video game history.
Posted by Adam at 1:00 PM

Never even knew it existed, until now.

Has there ever been a good Superman game?

Super Man has always been the hero of the bullied

hmm interesting interface,
oldie but goodie to me