Fact of the Day: End of Dinosaurs 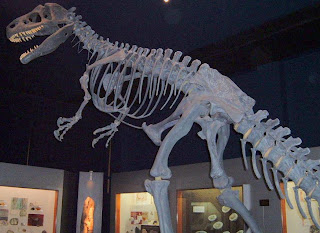 The reason the dinosaurs died out is believed to have happened during The Cretaceous–Paleogene extinction event about 65-66 million years ago. While many theories have been stated, the most credible is one from an asteroid/meteor impact. The force of the impacts was terrible enough, but a dust cloud formation blocked sunlight for years leaving catastrophic consequences for all life when plants and plankton had little sunlight for their photosynthesis. It's believed about 75% of all species vanished after the event.
Posted by Adam at 12:00 AM

That is really a fresh and interesting fact .

May be, according to MAN !

Interesting.
Someone stole a large Dinosaur in transit this past week! Somewhere in Australia I heard.

Have a Lovely Week,

It is possible. And it's also a frightening thought because an asteroid/meteor impact can happen at any time.

Believed, but we will never truly know

Let's just hope we don't get hit by another meteor again:P

I used to want to be a paleontologist haha. Wonder if it's too late?

interesting issue :)
New post is up on my blog you should have a look :)
oxoxoxo
Marie

We think we're so much better off in these modern times with all of our technology, but if something like this hit us, I bet 75% of us would die, too. :)

Yeah that could wipe out us just as easily, still say the aliens did it haha

I'm kinda glad they are gone. We would probably be dinosaur bait if they still existed!