Fact of the Day: Southern Democrat 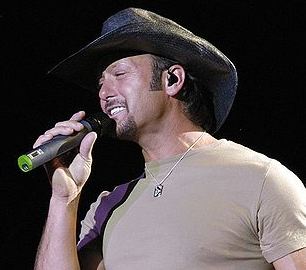 Despite being a huge hit in the country music genre which does well in southern and conservative states, Tim McGraw is a proud member of the Democratic Party. He's praised President Obama, and former President Bill Clinton, and hopes to one day become Governor of Tennessee or a senator representing his home state.
Posted by Adam at 12:00 AM

Not a fan of Tim's singing, however he and his wife visited Australia last year, I heard one of their songs together and it was really lovely.

I KNEW I liked Tim more than just for his amazing abs.

I didn´t know! Have a great weekend!

Didn't know he wanted to get into politics.

Well at least he won't waste the tax payers money, as he'll be able to sing for his supper.

I had no idea he wanted to get into politics. Good luck to him.

See. Wrong people getting into politics. What training does he have?
What experience in economics, infrastructure etc....
He should just sing and forget about it.
lol

celebrity politicians were quite prone here

and he's a good actor, and he's married to the beautiful faith hill.