Fact of the Day: Washington Perfection 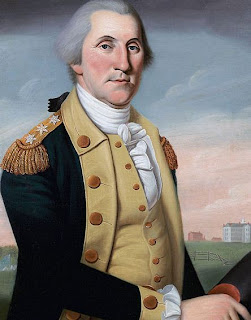 George Washington is the only president to receive every single vote in the electoral college. James Monroe won every single state in the 1820 election (running unopposed) though one single elector named William Plumer pledged 1 vote to John Quincy Adams. Some credit the move to preserve Washington's legacy, but others claim that Plumer thought Monroe was a mediocre president.
Posted by Adam at 7:00 AM

George had it goin' on for sure.

Sure knew how to pose too

American History is so interesting!

that is what you call a landslide

Such an interesting fact!

Not a blemish on him.

I wouldn't have minded having George's house in Mount Vernon; very scenic area :)

Warton is a village and civil parish in the City of Lancaster in north Lancashire in the north-west of England, close to the boundary with Cumbria, with a population of around 2,000. It is a village steeped in history; its earliest recording as a settlement is made in Domesday Book written in 1086. The nearest town to Warton is Carnforth, which was originally part of Warton parish. It has connections to the first President of the United States, George Washington: Washington's ancestor of seven generations, Lawrence Washington, is rumoured to have helped build the village church of St Oswald. The parish covers an area in excess of 11,000 acres and is predominantly rural. The parish of Warton had a population of 2315 recorded in the 2001 census.

I don't think enough Americans realize just how incredible a leader and president he was.