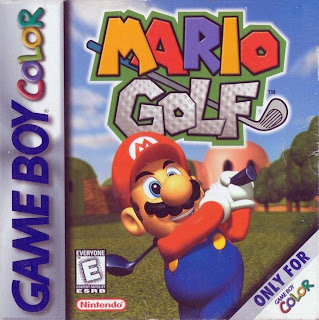 Like most gamers, I enjoy most of the titles in the Mario series. While I'm not the hugest fan of golfing, I did enjoy the two Mario Golf games on N64 and Gamecube. I totally missed out on Mario Golf for Game Boy Color back in 1999. I heard fantastic things about it over the years, so I didn't hesitate to get it on the 3DS' Virtual Console. 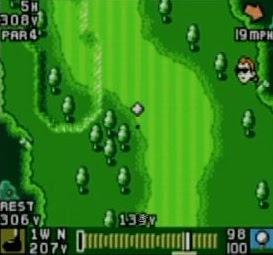 Unlike Mario Golf on N64, this version is only in 2D. I remember loathing the 2D style game-play in Golf for NES, and it honestly brought back some bad memories. But I have to admit, the golf in Mario Golf is much better and could rival the game-play found on it's console counter-parts. Though I must confess that I got frustrated when putting as it's not exactly easy to guess how to calculate your shot. 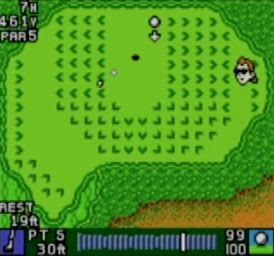 The game has two modes; one is a very simple style where you play courses for fun with a Mario character, and the other combines RPG-elements to give you tournament challenges. I have to say I do like the option to improve your abilities, and the chance to defeat several computer-opponents in a tournament. Though the Dunes Course and the Links Course are too difficult for their own good. 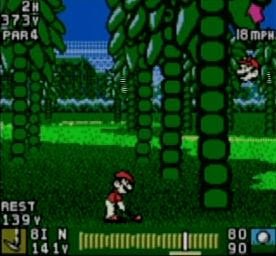 While the game may appear to be primitive, it golf at it's finest for the Game Boy Color. It's not immune to aging though, as the graphical limitations (especially putting) can cause some unnecessarily bad scores. Which led me to eventually give up trying to win all the tournaments as a few mistakes set me back from first place. Also the 3DS's Virtual Console version lacks multiplayer, which is rather lame. Though despite my criticism, this is a great game for Mario and golf fans.

Never a golf fan so skipped this one, but played all the other sports ones

I don't golf, but this game looks pretty fun.

i used to place this game before...

The best thing about video golf as opposed to real golf, I can play it with no pants on.
And I can still drink beer and swear a lot.

My favorite golfing game to this date was the Tiger Woods game on XBOX, I didn't think I could get in to it until a buddy of mine talked me in to it.

I know my wife played Mario Bros when she was a kid. So I know the game character.

I haven't played it yet, but I like the Mario series :)

never been into golf yet this sound kinda interesting

Seems so retro! I never had a gbc and actually never had a Mario Golf title... Maybe after reading your review I should start from here.
Cheers.