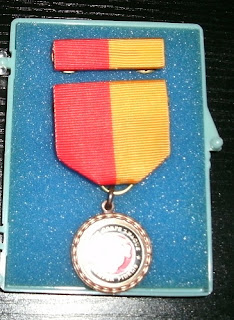 Back when I was in high school, I took JROTC (a military class) because my brothers had taken it. Unlike my brothers I never had much respect for the hierarchy of cadets who thought themselves to be so superior. Honors day every year was usually very depressing, as you could easily tell which favorites would get awards and trophies. But my last year there I was totally shocked to receive an award from the Marine Corps (even though we were an Army JROTC) for leadership. Even though I never got the chance to wear either the ribbon or medal, I still treasure it.
Posted by Adam at 12:00 PM

You must have been really good! Bravo Adam, congratulations, it's a good memory. Happy Easter!

Awesome indeed, to win it at your feed

That's great! Congrats on the medal :)

That is really cool!

congrats never got any hahaha

congrats. it's the unexpected awards that seem to hold value. don't ya think?