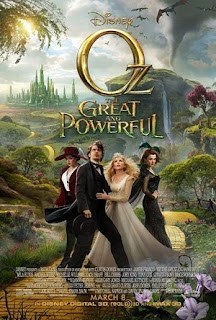 While the books were legendary in their time, the 1939 film The Wizard of Oz was a huge hit and virtually preserved the series place in history. It was one of the most classic films ever made, and despite numerous other TV shows and movies based on the land of Oz, nobody has come even remotely close to recapturing it's magic. Now in 2013, Disney has produced a prequel (to the book the 1939 film is based on) set long before Dorothy Gale followed the yellow-brick road. 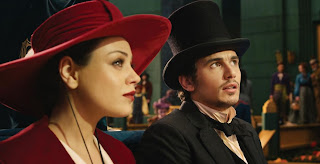 The story starts off in Kansas, as a magician named Oscar Diggs performs magic shows for a small circus. After infuriating everyone due to his personal faults, he flees in a hot-air balloon which gets caught in a mighty tornado. Oscar survives and lands in a magical land that he's never seen before. A young witch named Theodora greets him, and reveals to him a prophecy that foretells that he is the great wizard that will destroy the wicked witch and become king. 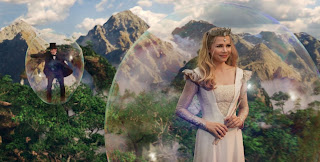 But the land of Oz is not perfect. Oscar does not believe he is the wizard of legend, and there are many secrets unbeknownst to him. Outside the Emerald City, Oscar discovers the Wicked Witch has oppressed many people, and stops at nothing to prevent him from become ruler. The magician from Kansas eventually forms a bond with Glinda, the good witch of the south and they band together to fulfill the prophecy.

Honestly I really enjoyed Oz The Great and Powerful. It's not perfect, but it's one of the best prequel stories I've seen. I do like how Oscar Diggs starts off as a rather flawed individual, but uses his wit and good nature to become the Wizard of Oz. I also loved Michelle Williams as Glinda, and I thought Oscar's winged-monkey helper Finley was hilarious. 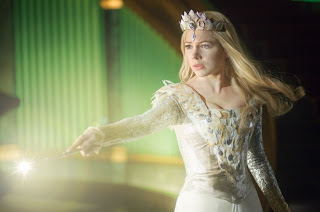 Does it hold a candle to the 1939 classic? Well I think it's rather unfair to compare the two. Talks of a sequel are strong, and I will be more than willing to watch it when it surfaces. I would love to see a strong batch of films based on L. Frank Baum's excellent Oz books.
Posted by Adam at 10:39 PM

wow! Thanks for presentation!
http://afinaskaterblogspotcom.blogspot.ru/

So does this mean we're going to see prequels to every story possible now? They're really stretching for ideas aren't they.

Thanks for the recommendation, Adam. I'll put it on my list.

I have never seen the Wizard of OZ, a must see by what I read.

I must see that one.

I want to see it!! Must be amazing!Kisses:)

I haven't seen this yet, but have read great reviews:)

I didn't go see that one, I will however rent it.

We saw this one last weekend. As a huge Wizard of Oz fan, I was a bit disappointed. It seemed they focused more on the visual effects than the storyline and I grew bored 1/2 way through. And it was 2 1/2 hours long. A little too long for my attention span. However, my husband and kids loved it!

i so love this movie, i was laughing out loud on the entire screening

it looks like a really cute movie. adam, are the visuals artistic?

artistic? depends, but they are really well done

I definately want to see this movie! I loved the -39 version. Thank you for your kind comments on my blog!

I loved it, but it should have had more badass magic. And.. it was pretty obvious who the wicked witch was. Still gonna buy it though!