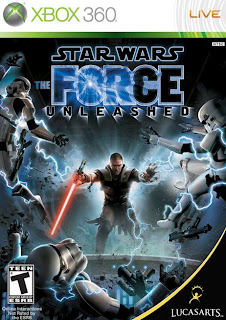 I remember Star Wars: The Force Unleashed when it came out several years ago. While there have been countless games based on our favorite Jedi, this one was a bit unique as you got to play as Darth Vader's secret apprentice. Though this dark padawan couldn't impress me. 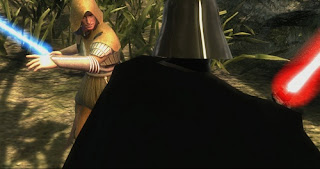 Though I really liked the first stage where you play as Darth Vader himself. It was super easy, but defeating the army of wookies was pretty fun. It all ends in a decent fight with a former Jedi in hiding. 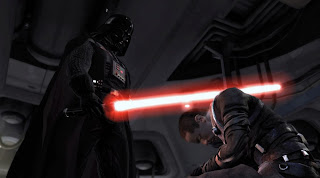 You play mostly as the defeated Jedi's son who becomes the Sith Starkiller. Except he's not really as evil as you'd expect. And he doesn't exactly fight Jedi and Rebel forces either, apparently even Imperial troops are fair game.

I didn't mind the story, but the game-play was pretty bland. The light-saber and force powers are alright, but I ended up just running around hallways fighting countless enemies. I got bored and opted to play something else, and by the time I got done with all my other games I had no motivation to ever play this again.
Posted by Adam at 2:00 PM

Sounds like one to skip, which I did when I saw it.

I don't play video games, but I laughed when I saw the "Things I hate" title. Cheers! Bad Star Wars is as bad as it gets.

I remember playing a demo of this a few years back. It was all rather easy until I got to an awkward platforming section and died about 5 times in a row. In the future, why don't they build paths so that people don't have to make 15 foot leaps of faith to get around everywhere? That would make your journey to work a lot trickier.