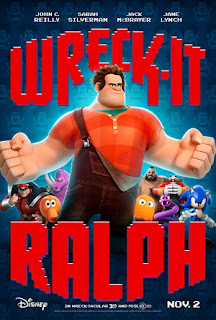 I heard about Wreck-It Ralph last year, but honestly 2012 was a fantastic time for movies. I wanted to see some other films just a little bit more so I decided to wait to see it when it hit DVD. Wreck-It Ralph combines classic video game culture with an original story. 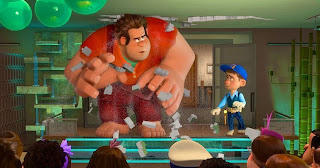 The main protagonist Ralph is actually the villain of the arcade game Fix-it Felix Jr. After spending decades in the local arcade, the cast of the video game have a party when the arcade is closed. Ralph is tired of his role as a bad-guy and is sick of the way he's treated by the rest of the characters from Fix-it Felix Jr. After ruining their 30th anniversary party, Ralph is told that he can never be accepted until he becomes a hero. 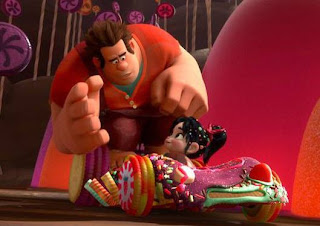 So Ralph jumps out of his world, and enters other video games to do something heroic to get a gold medal.  After getting his prize from a futuristic alien FPS, he ends up crashing his spaceship in another game. He then lands in a go-kart racer with a candy world setting. He ends up forming a friendship with a young racer who's forbidden to compete, while Felix Jr. searches for Ralph as his actions not only inadvertently threaten the future of their world, but ultimately every game in the arcade.

Wreck-It Ralph surprised me a lot to be honest. I was expecting it to rely heavily on classic video game characters, but they are mostly present at the beginning  The original characters and games get the spotlight pretty much as soon as Ralph decides to become a hero. I actually liked Ralph and Felix, the world of Sugar Rush, and Sergeant Tamora Jean Calhoun a lot. Disney did an amazing job as it's a fantastic movie for all ages, and even for those who don't care much for video games.
Posted by Adam at 12:22 PM

I so love this movie! and it was very inspiring too

I haven´t seen yet but if you recommend us...I will do it!I love all kind of films .Kisses:)

I never did know what Wreck-it Ralph was about. I had heard how good it was, but never the storyline. Thanks for sharing it.

Yeah bought it the other day, will watch it soon at my bay

I've heard a lot of good things about this movie. Still need to go see it.

My nephew is spending the night this weekend. I have it on my rental list. Hope I like it too!

No kidding? I sure wasn't thinking of seeing this movie, but I shall keep an open mind.