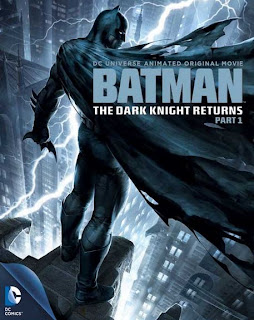 As many of you know I'm a big Batman fan. I will give almost any adventure featuring the Dark Knight a shot. I didn't really know about the The Dark Knight Returns movie until fairly recently. It's actually based on an original comic book series by Frank Miller, and after I heard that I jumped at the chance to watch it. 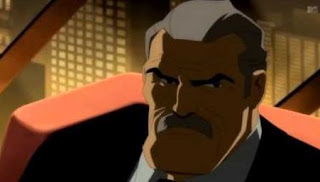 The plot is set a few decades after Batman's prime. Bruce Wayne is now 55 years old, and has retired as Batman for ten years. After Gotham's greatest hero disappeared, the city's crime has skyrocketed. While old villains are absent, a new group of criminals calling themselves The Mutants are terrorizing Gotham. 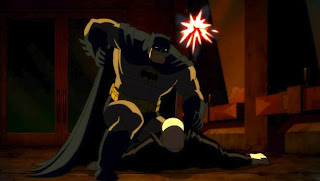 So after a couple of pushes, Batman returns to save the day. After defeating a few batches of mutants, he also must defeat his old foe Two-Face who's now had surgery to fix the bad side of his face. Despite looking normal, Dent is still evil on the inside and gives the Dark Knight quite the challenge. But when the original danger is gone, an old enemy comes out of the shadows for a final showdown. 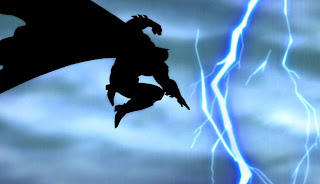 If the 2nd Part is as good as the first, this may be the best original animated film so far based on DC comics. It's not canonical to the standard comics story-line (known as the Earth-One universe) so once you get passed that you can really enjoy the creative tale. I would say Batman's ethics seem to be much darker than usual, but I can't wait to see the second half.
Posted by Adam at 8:00 AM

Still have yet to watch this one, better get on that it seems.

My hubby loves comic books. I think he has seen all Batman movies too.

It's not canonical to the standard comics story-line

Have you seen who is joining the DCU proper?!?!?

Frank Miller's stories are in the DC universe dubbed Earth-31. This version of Carrie Kelly that debuted recently is just another version of the character. Her role in the new story contradicts many plot lines set in The Dark Knight Returns.

well I don't know why I never been a fan of him,
tho i enjoyed his movies.
I think iron man is a better character than he is haha

I have a few copies of this four part series in mint condition sealed in Mylar baggies. Bought them decades ago when they first came out. It's a decent story.

Did you ever read any of the stories penned by Samm Hamm in Detective Comics or the Batman? Those were pretty good.

My boyfriend really likes comic books and I'm sure he likes this too :)

When I was younger I used to love reading comic books, for it freed me from the world I was in.

Thanks so much for your comment on my blog. Following you now on GFC, hope you can follow back =)

Ah, I do remember Superman, Christopher Reeve was the actor. I didn't like it, sorry.

I'm no fan of Batman though I've watch some movies, I'd pay big bucks if it's all about Spiderman - hehehe!

But what's interesting is through your blog I can read details of Batman now. Thanks.