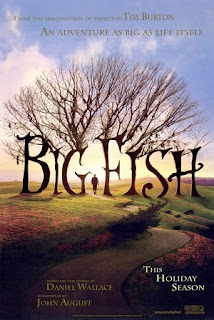 I somewhat recall when Big Fish hit theaters in 2003, but I never went to go see it. I learned Tim Burton had directed it, and that got me interested  While a lot of his newer films are often overly gothic and star Johnny Depp too much, his older films were often pure gold. Though this movie was actually based on a 1998 novel of the same name so the plot isn't purely original. 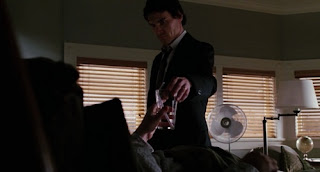 The movie starts out with Will Bloom who's had a rather shaky relationship with his father Edward. His dad had quite the habit for telling tall tales. While he idolized the stories as a child, he saw through the fabrications as a man. One day his father tells his favorite story to everyone, and Will flips out and the pair don't talk for three years. But Will attempts to heal their bond after he learns that his old man is now dying. 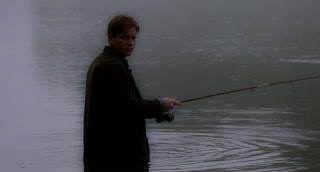 Before his father passes, Will attempts to figure out the truth within his father's tall-tales. The most notable of them is about the day he was born. His father claimed he missed his birth while at the lake after catching a giant fish with his wedding ring as bait. But the other tales are about Edward's life before his son was born. Some of the tales include his accidental discovery of a perfect town, working in the circus to know more about his future-wife, befriending a giant and much more. 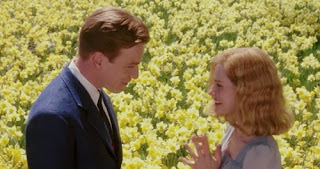 While I liked Big Fish, I do feel a tad disappointed. While I liked Ewan McGregor's excellent performance as the young Edward Bloom, I wasn't particularly impressed by the scenes in the modern day. It's a rather different mood of film for something by Tim Burton, but I still thought it was a decent tale.
Posted by Adam at 11:55 PM

I liked it a lot, especially the blending of the real/surreal. And I loved that some of the characters everyone assumed were tall tales showed up at the funeral :)

Haven't seen that film as yet.

I didn't realize Tim Burton did this movie. I was never quite sure whether I wanted to watch it or not. I never really grasped the storyline I guess. Now, I know.

Darn it. I think we saw it, but I can't remember it at all. Sheesh!

I like this film! I love Tim Burton! xoxo

I still haven't seen this film, but really want to!

I saw this movie a long time ago, and I remember liking Ewan in it a lot.

haven't seen the movie tho, i've seen some of it's part
i think i should watch the whole move to understand it

it was a very boring and long one, although I do adore Ewan!

It is a great film, I love it!Kisses:)

i quite liked it the first time i saw it. i wouldn't have realized it was by tim burton, but i can see it now. bring on the johnny depp i say.