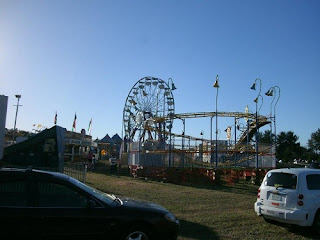 Yesterday I went to pick up my fiancee Daisy in the town she lives at and right near her house I noticed a carnival right next to the local library. Apparently Boiling Springs, SC has two of these carnivals every year (and they do a terrible job getting the word out) and we missed the one last fall. When I saw they returned we went soon after they opened later that afternoon. 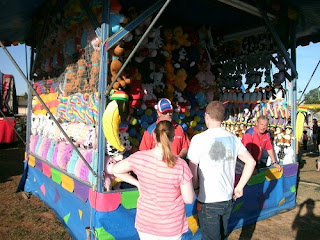 It wasn't exactly the biggest carnival but it had all what you'd expect. Rides, games, food, and a few more. My brother and his girlfriend came with us, and he won his girlfriend Tiffany a stuffed animal monkey. 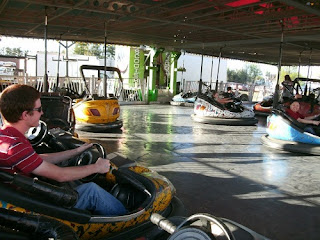 Daisy and I did more rides than the games. One of my favorites is the bumper cars. Daisy got a little mad when I picked a car directly behind her. Then to her luck, the guy operating it said it didn't work and I had to pick another one. 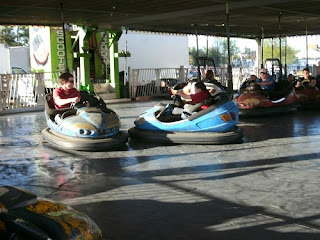 But we had fun, she did bump into me a good number of times. 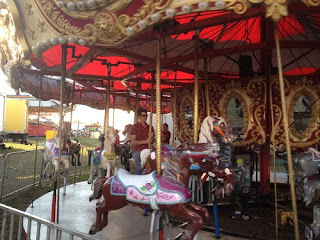 And the classic merry-go-round, not exactly fun or thrilling but almost a ritual that one must ride when going to a carnival. At least to me anyway. We rode many other rides, including one called Musik Express which was my favorite. It's shaped in a circle with a bunch of box-cars that move in an almost wave-like motion and gets progressively faster. 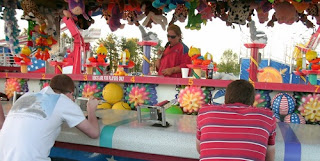 Right before we left, my brother Zach and I competed in one of those water gun races. I lost by a nose. 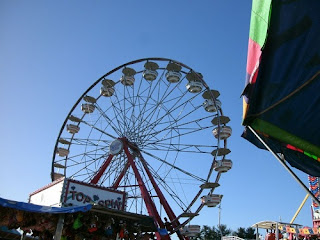 We had to leave a little early, but I'm hoping we can go by and catch the one in the fall. I hope we can go at night as I really want to ride the ferris wheel all lit up.
Posted by Adam at 4:00 PM

Looks like you and Daisy had a great time!! I love carnivals. Glad you were able to catch it this time around :)

Carnivals are fun! Looks like you had a great time. The water gun race is one of my favourite games, and I sometimes win when I play.

Unhealthy food (which is just plain delicious) and rides that spin you so much that you hurl.
Leaving room in your stomach for a couple of corn dogs.
What more can you ask?

Carnivals can be fun, looks like a great time was had

You and Daisy had a fun time with that good weather ! Happy Weekends to you guys !

That all sounds like a ton of fun. We used to love those bumper cars too. You sound like a fun loving good sport, Adam.

Nice photos of the carnival. I used to love the rides, but I can't go on them anymore. They all make me sick!

Looks like someone had a great time. Check out those shades!

If you want some Swedish decor inspiration...check out my blog:)

Have a wonderful week

Carnivals are so fun! The rides make me sick, but the food- oh yum! I have to get my elephant ear fix in at least once a year. Looks like you had a fun time!

what a spontaneous adventure!