Fact of the Day: Edo Tokyo 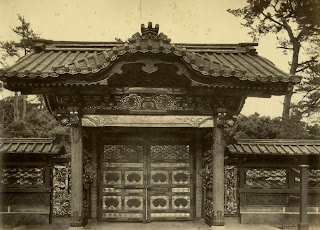 Until 1868, Tokyo was known as Edo in Japan. While Kyoto remained the formal capital for years, Edo became the de-facto center of political power and the headquarters for the ruling shogunate. When the shogunate ended and power was restored back to the Emperor, the city was renamed and made its capital.
Posted by Adam at 12:23 AM

I can no longer look at the restaurant Edo Japan the same way anymore.

Another fact I never knew

where do you find these random facts and how do you decide what to share?

they are really fun ^^

Never knew that, at my mat

japan! i so love there culture

yep, I knew that they've been changing the capital city over the centuries a couple of times

So interesting! I love the art of Edo period! Lucy www.tpinkcarpet.com

just what comes to mind. Virtually everything has interesting backstories, just got to know where to look.

Learned something new today, I have been in Tokyo but didn't know it was called Edo before.

You learn something new every day... Thanks!

And attracted untold numbers of dinosaurs.

I didn't know this. Cool fact!

What an interesting bit of trivia to end my day :)