Fact of the Day: Presidential Father 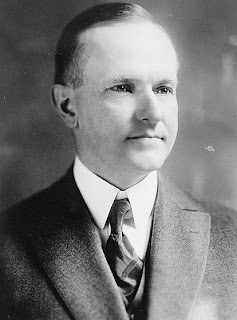 When President Warren G. Harding died suddenly on a speaking-tour, word took about a day to spread to Vice President Calvin Coolidge that he was now President of the United States. Coolidge didn't find out until late at night, and he was actually sworn into office by his father. He was re-sworn in by a federal judge to clear up confusion on whether his dad had the power to do so or not.
Posted by Adam at 12:31 AM

I am learning lots of things about your president´s history. kisses:)

Sworn in my his father, probably a good idea he got that changed

He must have been surprised.

Must have been quite the surprising moment indeed

gosh in those days, communication was so slow compared to how instant and worldwide it is today, amazing.

If there was social media then, he would've found out through FB or Twitter:D

I can see where that would be a conflict of interest.

not really his dad was just a public notary which has questionable power especially for a role he took. The role of president was rightfully his.

Only US President born on the Fourth of July!! And one of two born in Vermont!