Fact of the Day: War of Patriots 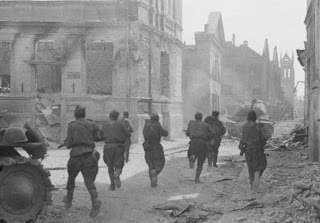 While World War II had two major sides, a lot of countries had different names for the war and only fought certain nations its allies may have not. In the Soviet Union (which saw almost no involvement in the Pacific) people referred to the war as the "Great Patriotic War" in Russian. Though the term specifically refers to the Soviet Union's battle against Germany and its allies.
Posted by Adam at 12:00 AM

Wonder what the Swedish called it.

I think abour it common name is World War II and in Russia and Soviet Union where I grew uo used both names
http://afinaskaterblogspotcom.blogspot.ru/

You do write about the most interesting things, Adam.

All war phrases are unspeakable.

i thank god i wasn't born on that era

Still no good name for it

it's because they had to defend the frontiers of their country, it was a war to protect their homes. My own country was attacked from all possible sides since all of our neihbours except us were on the side of the Nazis :(

It must be called the most embarrassing war of all times. It was something despicable. Kisses:)

I agree with Kay!

Horrible war, no matter what they called it.

I remember some of this in my son's Grade 9 History at the time. Interesting.

It was a very bad time for the whole world. My parents, and most of the adults I grew up around, who were quite young at the time of the war, lived in towns that were occupied by the Italians and Germans. They had some interesting - and horrifying - stories to tell.