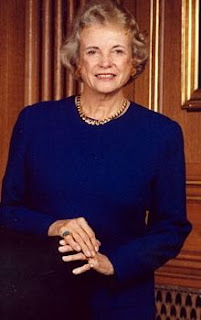 Former Supreme Court Justice Sandra Day O'Connor recently regretted her decision siding with the conservative side of the court by stopping the Florida recount in the 2000 presidential election essentially giving the presidency to George W. Bush.  She told the Chicago Tribune "Obviously the court did reach a decision and thought it had to reach a decision," and she added "It turned out the election authorities in Florida hadn't done a real good job there and kind of messed it up. And probably the Supreme Court added to the problem at the end of the day." Makes me wonder what the present day would be like if the recount had been allowed and Gore was (possibly) declared the winner.
Posted by Adam at 12:00 PM

One can only speculate

Yep, she's a day late and a dollar short.

I'm English therefore have no idea who these people are.

Being from kiwi land it all seems rather complicated. That's politics for you I suppose!

Many people have pondered that...if only.

i've wondered that often myself. we all know gore won the popular vote. we also know comics still make jokes about this election, even now.