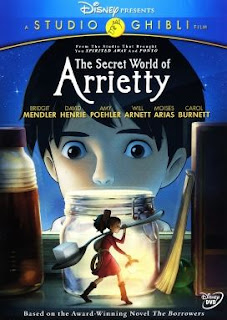 As many of my readers know, I'm a pretty big of fan of the films by Hayao Miyazaki from Studio Ghibli. I actually didn't know much about The Secret World of Arrietty until a few months ago. I guess one of the reasons why is that this movie isn't directed by Miyazaki like usual, but written. Though it's not purely original as I found out it's based on the English children's novel The Borrowers. It's not even the first movie to be based on the novel either, as there has been a made-for-TV movie in 1973 and a major motion picture starring John Goodman in 1997 both under the name The Borrowers. 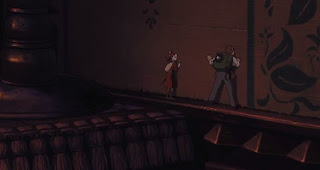 The movie is about Arrietty and her family who happen to be a race of very small humanoid creatures calling themselves borrowers. The borrowers live under a common house and take things at night that won't be missed. Such as sugar, a few cookies, tissues, and few other things the family depends on to survive. But they must be careful as they are incredibly fragile to the dangers of the outside world (such as birds and cats) and don't trust humans enough to reveal their very existence. 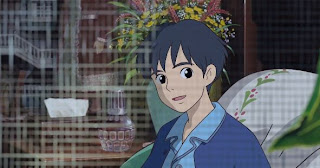 However a boy named Shawn (Sho in the Japanese dub) moves into the house to get some peace and quiet before his heart operation. The house happened to be his mother's childhood home, and she (along with her father) believed in the tiny people that lived under the house. Shawn discovers his mother and grandfather were right when he spots Arrietty. Because Shawn knows the existence of the borrowers, Arrietty's family insist on moving especially after the housemaid discovers the borrower family as well, as she intends to capture them and prove they exist. 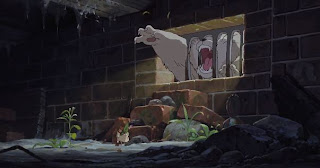 While I liked The Secret World of Arrietty, I didn't love it like most of the other films by Hayao Miyazaki. While the animation is beautiful, it just doesn't have the magic and wonder that are in the more original films like Spirited Away or Princess Mononoke. Like always Disney produced a great English dub (I would've watched the Japanese dub if my fiancee Daisy didn't want to watch it), but I think it is the weakest film I've seen so far by Studio Ghibli. Though since it's sister films are some of my all-time favorites, I can still recommend it with high marks.
Posted by Adam at 12:00 PM

I read the Borrowers in elementary school and loved it. Never saw this or the other versions, though I'd like to.

Check this article out on io9. Unfortunately, the video has been taken down but I'm sure you could track it down somewhere online.

Never saw this one, will have to give it a look

I have this one on TIVO. We'll probably watch it this summer when it's a rainy day and the kids are bored.

No la he visto!!
Saludos
http://judithbysucre.blogspot.com.es

I've never watched this one before. I really should get on it.

I so love this movie! the borrower's movie was great too

I remember loving this book when I was a kid.