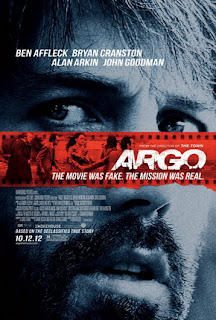 I remember hearing about Argo about this time last year. I liked the trailer, but missed it in theaters. After hearing it had won the Oscar for Best Picture, I had to give it a watch. It's actually based on actual events though some of my criticism will stem from some of its inaccuracies.

Argo is set in 1979-1980 during the Iran Hostage Crisis in Tehran. The people of Iran are angry that their former ruler the Shah Mohammad Reza Pahlavi had fled the country. Angry with the United States due to it's support of the Shah, a large number of people storm the U.S. embassy leaving nearly all of the Americans residing there to be captured. Six manage to sneak out of the building and find shelter in the home of an Canadian Ambassador.

When the situation turns to crisis, things do not look well for the six Americans. With no way to leave Iran, CIA agent Tony Mendez attempts to rescue them and return them home. With all ideas looking pessimistic, a clever plan unfolds to pretend that Mendez and the six Americans are a Canadian film crew looking for an unique location for a sci-film.

First off, let me state that I thought Argo was a wonderful film. All the actors do a superb job and the story is beyond entertaining. But the inner-historian in me takes a bitter note with some of the differences between the real events and the movie. It down-plays Canada's huge role in the operation, falsely accuses Great Britain and New Zealand of turning away the diplomats, and the airport chase never happened. I'm a bit surprised it had won the Oscar for Best Picture as I enjoyed Les Miserables and Lincoln (which were nominated) more than Argo.
Posted by Adam at 5:29 PM

Just like Hollywood to go and screw it up.

Oh my gosh! I loved loved loved this movie too, but you're right. It was inaccurate to say the least, and being Canadian, it's a bit disappointing that our country's role in it was downplayed. As a film, however, I did really like it and thought all the actors were fantastic.

that's the movies for you...far based from fact most often!

You made some good points and this reminds me to take all movies with a pinch of salt when they are supposed to be based on real events.

Well, that's Hollywood for you. It's 'based' on a true story, but not similar to...

well that was an interesting movie, i havent watched it tho

I have been wanting to see this one. Hollywood is good at mixing up the truths when they make movies.