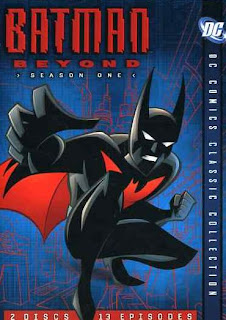 As many of you know, I'm a big fan of Batman. Back in 1999 after the success of the classic Batman cartoons came to an end, a new show was to become it's successor. Set in the future where Bruce Wayne is far too old to be Batman anymore. I had long heard of it and had seen clips from years past, but I decided to give the series a shot. 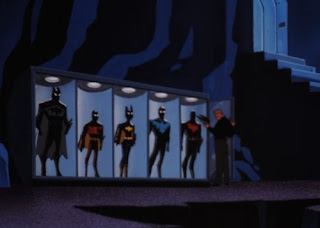 The series starts in 2019 where Bruce Wayne is having much more trouble fighting crime than he used to. Despite having a high-tech batsuit, Bruce suffers a heart attack while on a mission and to save his life he breaks his life-long oath never to use a gun even though he never fired it. He decides to retire as Batman and leaves the batcave in darkness. 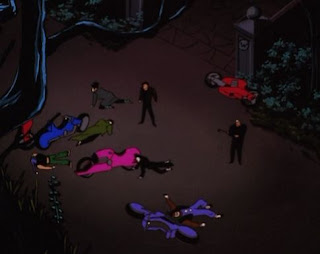 It quickly fast forwards 20 more years where Bruce Wayne is in no shape to retake his role as Batman. After crossing paths with Terry McGinnis after a rumble with a group calling themselves Jokerz, the young man finds out that Bruce Wayne was once the legendary super-hero. After Terry's father is murdered, Wayne reluctantly agrees to let him wear the batsuit and Terry becomes the Batman of the future. 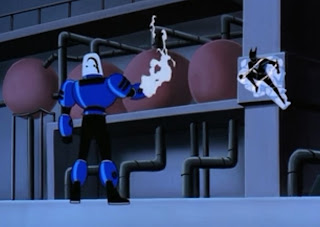 While I loved the concept and first batch of episodes, I thought the latter half of the season was rather weak. The new villains are a little lame, and despite new technology; Terry seems too under-powered in combat. I loved seeing old villains and allies return, but the story focuses unfortunately more on the newer bad guys. Still as a Batman fan I still enjoyed it, but those who don't like Batman aren't going to find anything to convince them otherwise.
Posted by Adam at 1:00 PM

Yeah it was okay, but as you say the villians were lame.

I really enjoyed Batman Beyond. Thought it was a great addition to the DCAU. Terry is still starting out in this season so it's a given that even with a high tech suit that he should have some struggles. You should check out Batman Beyond: Return of the Joker if you haven't yet.

Big fans of "Batman" know that it is "the Batman" and not "Batman."

I was always a Superman fan.