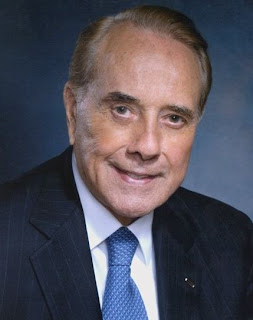 In a recent interview, former presidential nominee Bob Dole gave some comments on the current state of affairs with politics such as the gridlocked congress. He mainly expressed disbelief that both sides can't agree enough to set up a budget or legislation. While he did put some blame on President Obama for a lack of communication with congress in his first term, he also admitted that the GOP had become too extreme. When asked if he would fit with the modern Republican party he stated his doubts and commented with "Reagan wouldn't have made it, certainly Nixon wouldn't have made it, because he had ideas. We might have made it, but I doubt it."
Posted by Adam at 1:50 PM

I remember seeing something on the news about how when Bob Dole was in Congress, you went in his office and didn't come out until things were worked out. I don't know when compromise became such a lost art.

he got his point