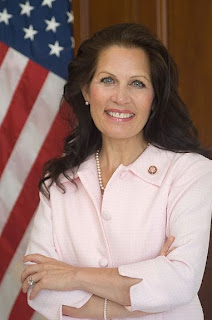 Michele Bachmann, the former Republican presidential candidate known for her bigotry against the LGBT community, conspiracy theories, and bizarre gaffes is announcing that she will not run for re-election next year. In 2012 she also almost lost her seat by a narrow margin. She claims her move was not stay in the House longer than a president can stay in the White House. But many have pointed out (which she denies) that she's retiring because she has been investigated for ethics violations for her failed 2012 presidential campaign.

I wouldn't fear her trying to make a run for the Senate, as (despite her district) Minnesota is a blue state, and while a moderate Republican could win a seat, there's almost no chance she could do the same given her record and "fame".  I wouldn't be surprised if she will be offered to be a full-time complainer on a conservative TV or radio show.
Posted by Adam at 11:30 AM

Go to tv, figures can't do anything worthwhile so just rant on tv for money.

You made my day posting this!!!!! I've been TV-less for almost 2 weeks so I hadn't heard!

What will the poor comedians do for material now??

Adios Michele. She won't be missed, I'm sure.

well, she better be gone i guess haha