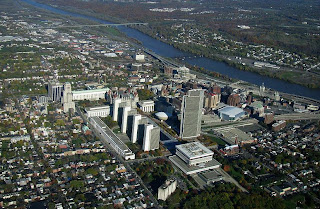 Despite being one of the greatest known cities of the world, New York City is not the capital of New York state. That honor belongs to Albany, New York. Albany is roughly 22 times smaller in area than New York City, and has only a population of roughly 97,000 versus New York City's eight million.
Posted by Adam at 12:00 AM

Email ThisBlogThis!Share to TwitterShare to FacebookShare to Pinterest
Labels: fact of the day, New York

wel home come it was known morethan the capital

I wonder what there's to do in Albany...

Knew it, as I live close by

Albany looks smaller than Toledo, where I used to live. Can a city be smaller?

LOL...did not know this, and Albany is pretty close to us too!

I thought NY had more than eight million.

depends on what type of population is counted. Metro population counts are always off the charts.

Albany is a cool city. I like it there!

I thought it was NY for the longest while, but heard this last year, go figure.

I'll bet if you asked 8,000,000 random people what the capitol of New York state is, they'd say NYC! How funny! Central City was a serious contender for the capitol of Colorado, but Denver won out!

oh! never know that
i wonder what's the reason behind the little capital

I did know this thanks to having to learn all of the capitals in school. I would much rather visit NYC though!

i always wondered why it was the capital instead of nyc.