Fact of the Day: Freemason Presidents 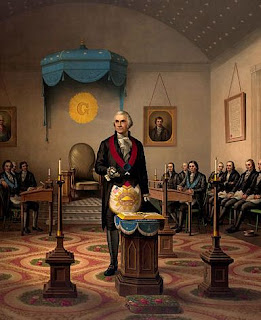 In the course of our American history, 14 presidents (and other presidents who tried to join) have been members of the Freemasons. The presidents include George Washington, James Monroe, Andrew Jackson, James Polk, James Buchanan, Andrew Johnson, James Garfield, William McKinley, Theodore Roosevelt, Howard Taft, Warren Harding, Franklin Roosevelt, Harry Truman, and Gerald Ford. The Freemasons are a fraternal organization dating back to 1390 or earlier.
Posted by Adam at 12:13 AM

Hmm, I didn't know it was as recent as Ford. I am curious, my great-grandfather was a Mason.

This is a subject I always have found very interesting when I read books. There is something misterious on it.Kisses:)

I wonder if any of them remain today.

That dates back quite a long way. It is an organization that I find quite interesting.

And I still want to know what the initiation is all about.

Wonder if there is a point to it or if they just liked get togethers.

Interesting. I didn't know Ford was a Freemason.

That's really cool. And they're a secret society, aren't they?

Didn't know that many were

Interesting. Although I've seen movies about this group that wasn't flattering. I don't remember the names of the movies though.

That picture looks high definition. I didn't realise they had that back then.

I do think it's impossible to capture just what the book encompasses.... thank you for sharing yet another interesting fact ^^

why is this? i wonder.