Fact of the Day: Governor Who? 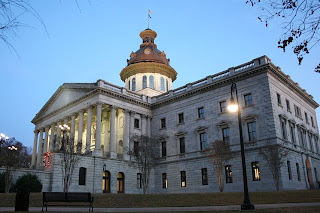 In 1915, Lt. Governor Charles Aurelius Smith became Governor of South Carolina, but only for five single days. He performed only ceremonial duties, but he only became governor for a single reason. His predecessor Coleman Blease had resigned so he didn't have to attend the inauguration of Governor-elect Richard Irvine Manning III. Blease was an ultra-conservative who despised the progressive views of Manning.
Posted by Adam at 12:00 AM

Email ThisBlogThis!Share to TwitterShare to FacebookShare to Pinterest
Labels: fact of the day, politics, south carolina

Wonder how much he got paid for it.

Thanks for the info Adam.

So bizarre how destiny can change everything. Interesting fact.Kisses:)

Thanks for sharing this one!

That is an awfully short amount of time!

I win. My shortest job was 1 day at a bridal shop. Beat that Charles Aurelius Smith!