Fact of the Day: Mayberry Democrat 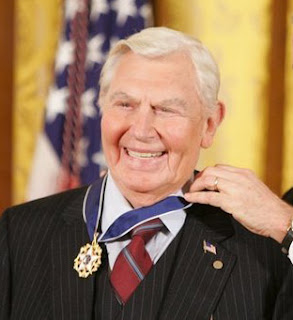 Despite being born and raised in the "red state" North Carolina, late actor Andy Griffith was a proud member of the Democratic Party. He declined an offer to run against Republican Senator Jesse Helms in 1989. He campaigned for Barack Obama in 2008, and also advocated the new policies for Medicare under the Health Care Reform bill in 2010.
Posted by Adam at 12:00 AM

yes, he was from a day when working people were not yet fooled by all the nonsense to turn against common sense, their own interests, and those of the nation. . . .

thanks for the information.
lovely greets
maren anita

What a lovely post:)your blog makes me happy every time.

I recommend a beautiful Swedish hotel in my new post..you must visit there someday:)

Have a great weekend dear

Sometimes it just doesn't matter where someone is from when it comes to their political views.

he seems a man of his will

I liked him as an actor.

He sure did what he wanted

What a lovely person :)

He was a man of character. Just wish I didn't learn he political persuasion.

Enjoyed his shows back in the day

I also loved him as an actor! I always wanted to live in a Mayberry Town too :)

Is that Matlock? A classic! I loved that tv show when I was little!
Thank you for your kind comment on my blog!

I always love this actor Adam!

i did not know that.