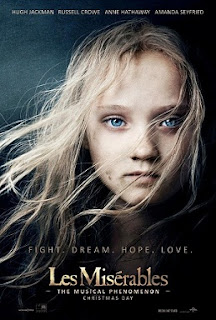 I remember hearing about Les Miserables last year and I have to say I was curious about the premise. It's a musical version of Victor Hugo's novel of the same name from 1862. Never read the novel, but its big stars like Hugh Jackman, Russell Crowe, and Anne Hathaway were the reason why I wanted to see it. I didn't get a chance to view it in theaters and I regret missing it at the time. 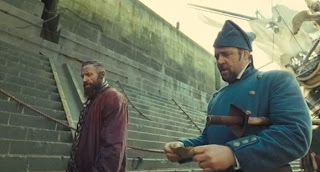 The musical-film follows the plot of the novel (from what I hear) pretty faithfully. The story starts out with prisoner Jean Valjean who's about to be a free man. Except his freedom is a harsh lifetime parole where his papers deem him a dangerous man and the guard Javert doesn't hide his hatred for Valjean. When Jean is released back into society, he is faced by a bitter cruel world that treats him worse than dirt. A kind bishop meets Jean Valjean and offers him the chance to become an honest man. 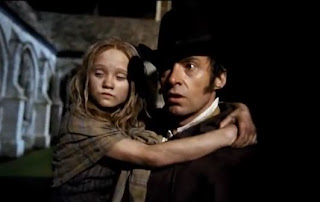 And Valjean does just that, as years later he becomes a wealthy businessman and a mayor under an alias. One day Javert (now a police inspector) meets Valjean in his new life, and becomes suspicious. He also tries to befriend Fantine, a young woman who's sacrificed everything to support her daughter. When Fantine dies, Valjean adopts her daughter Cosette while simultaneously fleeing from Javert who attempts to discover the truth. Valjean and Cosette live happily for many years, but when Cosette becomes a young lady the events of the 2nd French Revolution will change their lives forever. 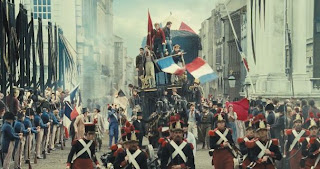 While I thought the early scenes were a bit weak (especially in the musical parts) they progressively got better and better. Folks who can't stand musicals might favor the 1998 film, but overall I really liked it. Jackman, Crowe, and Hathaway played great roles, but I also want to give some respect to Samantha Barks who played a fantastic part as Eponine. I loved the history and scenes involving the French Revolution as well. While some points in the story seem very rushed (it is a movie of a book after all), Jean Valjean's story of honor and redemption is something that can't be missed.
Posted by Adam at 10:54 PM

i haven't seen this, but i thought the other flick was way too long!

Never watched it and I don't really plan to. Musicals aren't really my thing.

I haven´t read the book either but I loved the film and Hugh Jackman , especially. Kisses:)

I really loved the film and thought it should have won the Academy Award. I still don't understand how Argo won over Lincoln, Les Miz or Life of Pi. And yes, I do love musicals.

Haven't watched it either, not on the top of my list for sure

thanks for the review Adam, i'm not exactly a big fan of this story... but the movie looks good

Have yet to see this one. maybe one day

Agreed it was weaker in the beginning

This is one of my all-time fave films! Samantha Barks was great in the movie, and she should've gotten more accolades.

they were all amazing, in acting and singing that movie truly deserve all of the awards it got

I'm yet to see it.... I have to first prepare myself for Anne's screetching and Rusell's efforts in singing... but I do love Hugh and Eddie Redmayne

I really want to see this one!

I hated this movie! It was so long and Russell Crowe's voice is terrible. The book is good! (says the librarian).