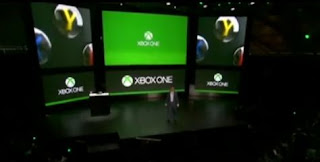 Yesterday I turned on my Xbox 360 to play some Halo 4 and to my surprise Microsoft put up a notice that they would reveal their next console. While it's code-name had been Durango (seriously?) fans had often referred to it as the Xbox 720. And now it's called the Xbox One. Not to be confused with the original Xbox. The One means the one stop for all your entertainment...or at least in Microsoft's dreams. 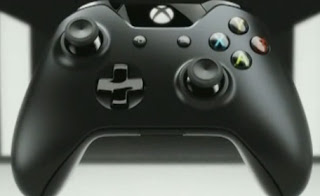 And they also revelaed the new controller. Looks decent I suppose, but much different from the Xbox 360's in style. Well sorta I suppose. The new system will use Blu-Ray discs but will not play your old 360 games. So don't toss out your 360 just yet.

They also had no hesitation confirming a Kinect device for Xbox One. It didn't take off as well as Microsoft wished with the 360, but I had to admire their commitment to pushing the technology.

Here's what the Xbox One will (apparently) look like. Nothing too exciting I suppose, but at least they showed what it'd look like unlike Sony's PS4. I really don't like the name though, because I would often call the first Xbox the Xbox 1. Having the third system be called the Xbox One will be really confusing. Imagine this "Hey man, have you played Halo on Xbox One yet?".
Posted by Adam at 9:05 PM

Email ThisBlogThis!Share to TwitterShare to FacebookShare to Pinterest
Labels: Microsoft, Xbox, xbox one

Yeah stupid name, that given the fact that kinect always has to be on to play it, you can only use it offine for 24 hours, you have to pay extra for used games, can only play a game on one gamertag, not a chance I'm going near this crap.

We're 360 owners. Not a fan of the One not having backwards compatibility. We'll be holding onto our 360 until it dies all the way.

Like that BluRay will be on the new one. Still though, gotta say, so not groovin' on the new name.

I don't even care for the way the system looks.

I guess that's progress..but its hard times to get used to something totally new when there are so many others things that we pay for these days.

From this conference, I have to say that I'm much more impressed with the PS4 right now, but we'll have to see more games before making a decision. E3 is going to be make or break this year.

I don't like the name either. Even with a crappy name, I don't think we will be purchasing this system. I hate it when you have to reinvest in a whole new system, then re-buy the games and accessories. It's too much of a money pit!