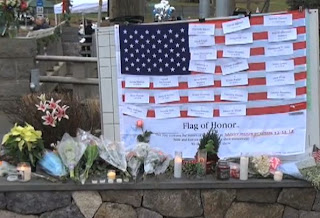 Bob Davis of Davis & Emmer in the Morning recently led a rant on his radio show in Minnesota. His rant started with this

"I have something I want to say to the victims of Newtown, or any other shooting. I don't care if it's here in Minneapolis or anyplace else. Just because a bad thing happened to you doesn't mean that you get to put a king in charge of my life. I'm sorry that you suffered a tragedy, but you know what? Deal with it, and don't force me to lose my liberty, which is a greater tragedy than your loss. I'm sick and tired of seeing these victims trotted out, given rides on Air Force One, hauled into the Senate well, and everyone is just afraid -- they're terrified of these victims."

Shortly after this rant he said he would stand in front of them all and tell them to go a fiery underworld. And his rage was not really over a major gun control bill, it was over background checks. For anyone, radio host or not to make such a statement is purely unethical, and Bob Davis should resign.
Posted by Adam at 10:19 PM

that's so selfish and harsh statement! he sure has to resign he should have consider the feelings of this people who's grieving on their lost

Such an insensitive moron. It's all about him....

He should also get a big punch in the face too...