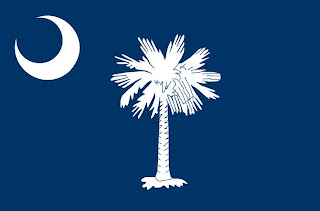 A motto for my state of South Carolina is "nothing could be finer" which is almost always untrue in every case. If we make national news it's usually bad news. While this may not exactly be fresh news, I saw a test from a claimed "South Carolina school" and shook my head a little and tried to hope it was a joke. Except it was no joke, it's from a real school. Not a public school, but a Christian one called Blue Ridge Christian Academy. And sadly it's not that far away from where I live. 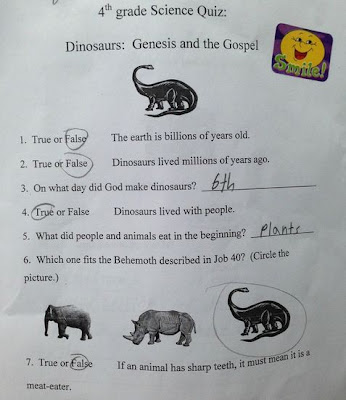 The first page of the "science" quiz starts out with questions that obviously lack any scientific basis. Basically claiming humans and dinosaurs lived with people only a mere thousand something years ago. This must be a school where you flunk out when you get the answers right. 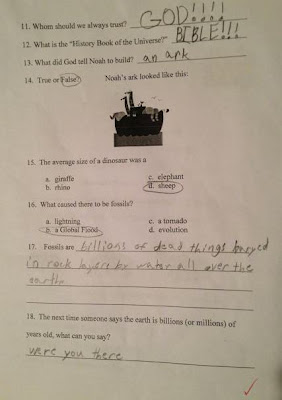 When the school's name was revealed the school's staff was interviewed. And apparently they were really surprised that people took such interest. I guess it would be non-news if it came out of some small-town Sunday school, but Blue Ridge Christian Academy is an accredited school where students may get accepted to a college that teaches actual science. 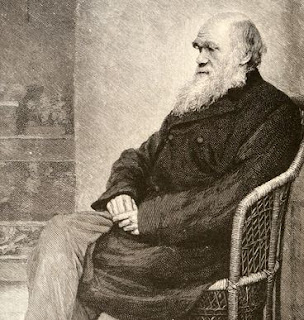 I've seen a lot of Christians try to make sense out of the bible. Often morphing the view on the stories from literal to exaggerated claims or metaphors. It's almost absurd that in this modern age that we can actually find the answers to the origins of life/Earth/Universe that there would be countless people believing without a fraction of doubt of things that are literally impossible. Why do you think creationists are so obsessive over dinosaurs and trying to disprove evolution? Because they were two of the first major examples of proving the Bible wrong. But since they are a private school they can teach whatever they what but like Neil deGrasse Tyson said " I object to religion in science classrooms not because it's religion but because it's not science."
Posted by Adam at 11:55 PM

You must be joking that is was no joke. Talk about sticking your head in the sand.

P.S. That must've been quite a big sheep.

Then they grow up disdaining other ideas and they vote. Scary

Holy moley. That is just so spooky and even a bit scary.

Oh boy... This will end up being the most startling story of the day!

Oh my, that is frightening!!

Wow. Just wow. On a different note, my friends son turned in a blank homework assignment and got one of those Good Job stickers on the top of his paper. His mom was like WTF? He should have got a big fat F, just like the kids in this school.

Well, i hope this as just an isolated incident

Hi Adam:) This is unbeleivable!!! It's worrying!

If you ever get the chance do read THE END WAS THE BEGINNING, by
OSCAR KISS MAERTH, I think you will find it's a facinating read.
I got mine second hand from ebay.

Have a nice day.

shaking my head. why are we going backwards?