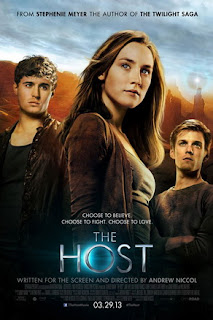 Outside briefly seeing one trailer for The Host, I didn't pay much attention to it. My fiancee Daisy invited her friends to watch a movie with us, and since one of them already watched Iron Man 3, we had to pick something else. They settled for The Host, which was based on a novel by Stephenie Meyer, the author of the Twilight books. After hearing about the awful critical reaction, I didn't know what to expect.

The movie is about a Earth conquered by a race of small aliens who can take control of the bodies of humans. The story begins with most of Earth taken over, and only a few pure humans remain. One of them happens to be Melanie Stryder, who almost dies trying to escape capture. But while in the custody of the alien forces, she is bonded with an alien host. A new persona named Wanderer (or Wanda for short) emerges, but to Wanda's shock; Melanie Stryder's mind has not faded away and can take some control.

Wanda and Melanie eventually sort out their differences and work together. They end up finding refuge in her uncle's secret cave. However the remaining humans don't trust Wanda as they believe Melanie no longer exists. The duo must convince everyone that Melanie's spirit is still around, but the greater danger is the alien seekers who attempt to find them.

While The Host is far better than I expected, it's also very far from perfection. I suppose it's greatest fault is that the aliens aren't very antagonistic. They're cold and lack emotion, but overall won't scare an audience. The only real villain is The Seeker whose importance falls flat. I guess the film floats around the idea of being either a terrific action film or a outstanding drama but only does a weak attempt of both.  While I really did like the story of Melanie/Wanda; the rest of the film was entertaining enough but seriously fell short of its potential.
Posted by Adam at 12:00 PM

nothing from TWILIGHT author can be good.

I haven't seen it yet, I think it's already playing in Italy though. I want to see The Great Gatsby. Have a nice Sunday Adam!

I've never seen Twilight and probably won't see this one either. But I thought you did a good job writing about it.

The book is better!

yeah....I don't think I need to watch this one, ever. haha

I'm not even a twilight fan.

thanks for your review :)

Yeah not one I'll watch any time soon

interesting. I think it's time to visit the DVD store

I don't have this one on my list of must see movies, but if one of my girls requests it, I may give it a shot.

Thanks for sharing this post. After a long time, such a post has been seen, it is a very interesting subject, people like it. When someone shares this kind of article, the mind is happy Thank you for this article
Call Girls Airhostess Sector 29
Female Escorts Gurugram
Call Girls Noida Sector 8
Call Girls Faridabad
Call Girls Sector 44
Call Girls Sector 1
Call Girls Kanahi Village
Gurgaon Escorts Service