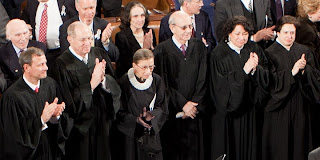 With the Supreme Court soon to announce the results of the two big cases concerning marriage equality rights, religious conservatives are now somehow planning to defy any ruling that will give more rights to the LGBT community. The results of both cases could give the rights for anyone to marry similar to the 1967 case Loving v. Virginia which struck down any law restricting marriage based on race in every state in the union. Or it could at least give more freedom in some states.

If the ruling turns out favorable, more than 200 conservative activists from state house members to religious leaders have already pledged to defy the Supreme Court. Now I'm not surprised to see their discrimination and bigotry, but I can't help to laugh that they somehow think they can overrule the nation's highest court. The Supreme Court can overrule the president, and congress, so what kind of authority do these 200 activists have?
Posted by Adam at 2:06 PM

boo and hiss at religious fanatics!

You are so right. People of faith have real battles of compassion and witness to Gods love to do. These guys remind me f king .Canute :-)

Conservative thinking is not thinking.

Well, they can certainly try, but they won't get far with it...

well, god is the most understanding of all I'm pretty much sure that he will understand such thing, good thing my faith goes with him not by the church

religious nuts need to crawl back into their hole