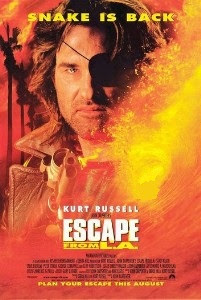 Back in 2011 I had watched Escape From New York which was a classic movie from 1981. It was set as a thrilling tale of an anti-hero's quest to save the President of the United States in New York City which had been turned into a mega-prison. I loved it, but I waited a good bit to the see this sequel that was made 15 years later.

Escape From L.A. takes place many years after the events in New York. In the year 2000, a huge earthquake hits California and Los Angeles drifts off the mainland and becomes an nearby island. During that year a Christian theocrat is elected president and soon given a life-term and unlimited power thanks to an amendment to the U.S. Constitution. America soon becomes purged of all people deemed unworthy by the President to Los Angeles which has become a super-prison.

Then in 2013, Snake Plissken is easily convicted of violating many of the "moral" laws set forth by the new government and is up for deportation to L.A. But before he is sent there, the President himself offers him a full-pardon if he can complete an important mission. The president's daughter had been brain-washed into giving a Peruvian Revolutionary a device that could change the lives of every person on the planet. With little options Snake agrees, and sets out to enter and escape from L.A. 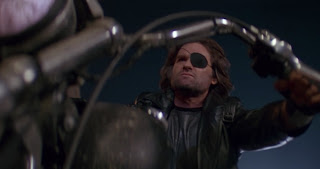 The story-line may be a lot of deja-vu from the original film, but I found it hard to hate Escape from L.A. Snake is still pretty cool and there is never a dull moment. The plot sometimes doesn't take itself seriously and there are a few bizarre moments but I loved every second. The first film was a masterpiece, and while the sequel may not be as awesome I didn't feel very disappointed.
Posted by Adam at 3:00 PM

I have to admit that I like this movie, seen it twice.

Yeah I liked it too, wasn't as good as the first but still good. Although they are remaking it now pffft to that, should make the third one they always talked about, Escape from Earth.

I like sci-fi films but I haven´t seen this one. I take note.Kisses:)

I like Kurt Russel, and I like this movie, not as much as his role in Soldier though!

Pffff my cat's crap is better quality. It was so redundant. Good thing Kurt was in it or else I would've eaten that tape.

Haha, when I saw the picture, I thought it was the movie "Captain Ron"!

I have not been to a movie in so long. I think the last one I saw was Driving With Miss Daisy, which is definitely not your taste.

I remember the first Kurt Russell movie I saw: "The Computer Who Wore Tennis Shoes."
Didn't have an eye patch in that one.
He had tennis shoes, though.

I have never seen this one. If I catch it on tv, I will check it out.