Fact of the Day: Esperanto 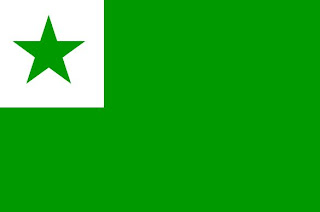 Esperanto is the most widely spoken language (with estimates between ten thousand to two million speakers) that was intentionally devised instead of developing naturally. It was created by Dr. Ludwig Lazarus Zamenhof who spoke many languages with Russian being his native language. Esperanto is most popular in Europe and Eastern Asia.
Posted by Adam at 12:10 AM

hmm, too bad I never even heard of such language

I thought it was just an artificial language created for better understanding between scientists but I didn´t know too many people spoke it. Kisses:)

I never knew about this , very nice fact :)

I've spoken Esperanto for many years, and I reccommend it as a way of getting to know people in othjer countries.

If you're interested in learning Esperanto, take a look at http://www.lernu.net

Never heard of that...well always learning something from you :)

Never heard of it either

I've never heard of it either.

Thanks for your lovely words, it is much appreciated!
I heard about Esperante but don't know how to speak it...

First I'm hearing of it

That's really interesting Adam, I had heard of Esperanto but had no idea it was still spoken in parts of the world.

I think almost nobody speaks it today since English has become widely predominant as an international lg.

I tried to teach myself Esperanto when I was a kid. Thanks for the memory. :)

I'm with the rest, never knew about it what so ever.

I've heard the name before, but never knew anything about it. Especially that it was intentionally created. I want to make my own language. :(

why have I never heard of this language? Hmm.

I have never heard of this language before. Would love to hear it spoken though!