Fact of the Day: Separation of Church and Kennedy 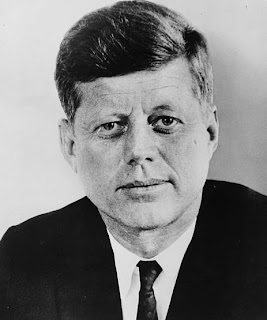 During the 1960 presidential election, some Protestants feared that Democratic candidate John F. Kennedy would take orders from the Pope because he also happened to be Catholic. Under pressure, Kennedy made an famous speech in Houston before a protestant audience affirming his duty to separate church and state. Kennedy would later win the election in a very close race against Richard Nixon.
Posted by Adam at 12:00 AM

well, I guess theres really is conflict on both parties

interesting. anyway, I attended a wedding wherein a bride is wearing a red gown. It was such a beautiful and very modern wedding! haha :)

I liked John F. Kennedy, he was honest.

I wasn't born when all this was going on, but I heard my parents talk about that race several times over the years. It was the only time they didn't vote for the same candidate, if I recall correctly.

Have a great Saturday!

I'm all for separating church and state!

One of the last ones that didn't lie is butt off

He had so much charisma!

I'm Catholic too, but do agree with the separation of church and state.

hooray! too bad no one listens.