Injustice: Gods Among Us (360) Review 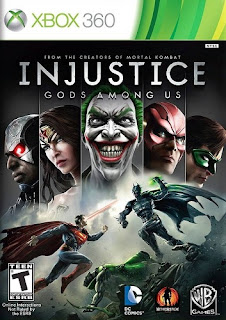 Last year I didn't pay much attention to Injustice: Gods Among Us as when I heard the title I didn't realize this one was based on DC comic's Justice League heroes and their super-villains. I also wasn't shocked to learn that the people behind the Mortal Kombat games were behind Injustice. They had made Mortal Kombat vs. DC Universe a few years ago, but this time they focus only on Superman and his friends.

Except Superman doesn't have a lot of true friends in the story-mode which has a brilliant plot. The Joker uses the Scarecrow's fear-toxin on Superman who accidentally kills Lois Lane (who was carrying his unborn son) by thinking she was the super-villain Doomsday. Superman loses control and murders the Joker in revenge. He then establishes a government covering the entire world under his own control. Most of the super-heroes and villains yield to Superman's control. However Batman sends Justice League members from another alternate universe as a last hope to defeat the corrupted Man of Steel. 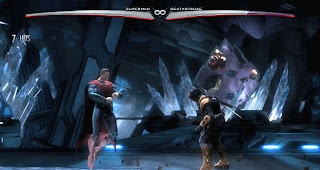 In addition the story-mode (which almost feels like an interactive movie), the game also features classic modes featured in other fighting games. It also boasts a large cast with an equal number of heroes and villain from almost all DC comic series. And of course online play which runs fairly smooth, as the matches I played didn't suffer from any lag at all. 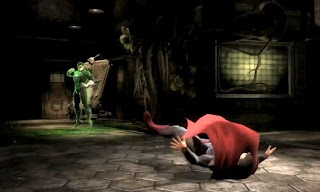 But overall I liked the fighting system, and most characters were balanced enough. I loved the story-mode even though it's bit short. It may not be the greatest fighting game ever made, but it's the best one I've played in a long time. If they make a sequel, I hope it's even better than this gem.

I want to play it now. It sounds awesome!!

Good fighting games are hard to come by

I was actually addicted to ipod version of such game!
i like to use flash, sinestro, nightwing and cat woman