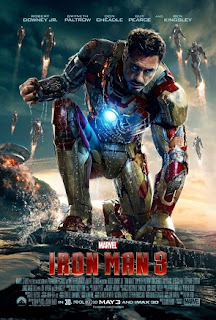 Marvel's Avengers-related movies are some of my favorite films in recent memory. It all started with the original Iron Man film, and now Tony Stark is the first super-hero to get a new adventure after The Avengers. I actually really liked Iron Man 2 more than the original, so I was hoping the third film would be even better.

The movie starts shortly after the events of The Avengers. Tony Stark is having emotional and mental issues after nearly dying from Loki's alien forces. But Tony has little time to rest as a new villain calling himself the Mandarin is now terrorizing the world. The Mandarin is not alone, as he has a squadron of super-powered humans who are strengthened by a new scientific technology called Extremis.

When one of Tony's old friends is nearly killed by one of the Mandarin's agents, Tony declares that he is not afraid of him to the entire world. Tony's girlfriend Pepper Potts is not so confident, and just as soon as they decide to flee their home, it is attacked by a squad of helicopters. Tony becomes Iron Man at the last minute and survives. His suit is badly damaged in the process, and he must recover to save the entire country.

Overall Iron Man 3 is one of my favorite films of the year. I really liked the comedic parts, and I thought Ben Kingsley was terrific as The Mandarin. I also thought they did a great job in the variety of scenes as Tony Stark must be a super-hero without his suit during certain points. The final battle wasn't as epic as I had hoped, but I can't wait to see Iron Man return once again.
Posted by Adam at 12:07 PM

the movie was good fun. Not my favorite blockbuster of the summer but it's good on so many levels.

glad to hear it's good!

I have yet to see it. Hopefully soon@

The movie was filmed right here in Wilmington where I live. RDJ was seen all over town and word on the street was he is a heck of a nice guy.

Thank you for this, I might watch it now

Hi Adam"!
Thanks for our nice comments and visit.

Thank you for this review! Lucy www.tpinkcarpet.com

I can't wait to see this!

You are definitely a young man that loves all the action characters. I am to old for them.

Ben was so great, I totally agree. Really did a super job with his role. It looked like he was having a lot of fun with that part.

Iron man my most favorite marvel hero, the robert plays it so damn well!
ans as for this movie! it was merely the best!