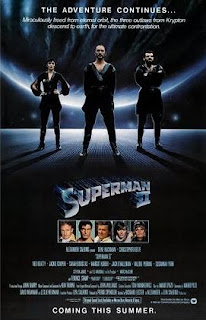 Since the new Man of Steel film is coming out soon, I been meaning to check out the previous Superman films. I liked the original Superman film, and I heard Superman II was even better. 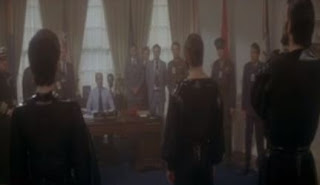 Superman II is set shortly after the events of the first film. Superman is a well-known hero, but as he saves Paris, France from a nuclear devices it's hurled into space. The explosion causes three former Kryptonian criminals (who were punished by Superman's father) to be freed from the the phantom zone. They travel to Earth and realize their new-found abilities thanks to the Earth's yellow sun. 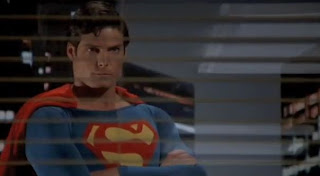 Evil General Zod and his two companions attempt to conquer the Earth. After devastating a small-town, General Zod forces the President of the United States to abdicate all his powers to him.  With the Earth at his mercy, the only person capable of stopping is Superman. Now the Man of Steel must face three villains with powers that rivals his own. 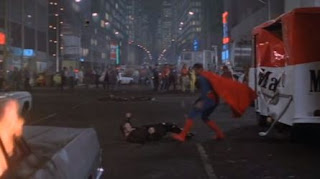 I ended up liking Superman II more than the first film, as I felt it went by a little quicker and had better action. While I loved Lex Luthor in the first film, he never felt like a real threat to Superman. The new trio of evil Kryptonians definitely give Superman quite the challenge.  The special effects at times are rather laughable but I think it holds up quite well.
Posted by Adam at 3:00 PM

yeah the effects were pretty bad, but not a man in a godzilla suit bad haha

Now you found one I am familiar with. They do not make movies as good as some of the older ones tho.

I haven't seen this movie in a long while.

Bad! Bad! Bad! What are you saying, Pat! They did it all in-camera. No digital stuff whatso ever! Bad! Bad!

Okay, maybe a little bad. But no godzilla in a suit bad. ;)

Chris was the only real superman.

Ohh i've seen this, the effects sucks but i kinda like it