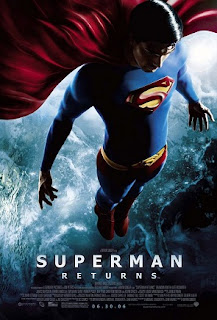 With Man of Steel already in theaters, I've been trying to watch all the Superman films except Superman III and Superman IV since they're regarded as terrible movies. Another reason is that Superman Returns is a sequel to the original films that ignores any events in the third and fourth movies.

It takes place a few years after the defeat of General Zod. Superman left Earth to see the remains of his homeworld Krypton, and returns five years later. When he gets back home, he is devastated to see that Lois Lane is now married and a mother. Regardless both Superman and his alter ego Clark Kent return in Lois' life.

While Superman was away, Lex Luthor managed to avoid prison time thanks to Superman not being able to testify against him. Luthor returns to the Fortress of Solitude and takes the Kryptonian crystals which are able to form land masses when put in water. He plans to use the technology to create a new super continent which will endanger billions with rising sea-levels. It is up to Superman to defeat his old nemesis once more.

Don't get me wrong, I think Superman Returns is a decent film. But the fact that they are using the same characters and story from Richard Donner's version of Superman don't work out too well. Lois Lane may be more beautiful, but her attitude and personality don't remind me of the old Lois.  And while Kevin Spacey may have the look and attitude of a classic Lex Luthor, he lacks the comedic brilliance of Gene Hackman's take on the character. To make matters worse is that the final battle is actually a little boring. I actually wished they had decided to restart the story all over again, because this sequel fell a good bit below its potential.
Posted by Adam at 9:38 PM

Will you believe it....that i never watched any single movie of Superman. Yea but this is a fact that Superman is the favorite of many among us especially children get fascinated and buy the t shirts having superman picture.
Have a great weekend Adam

Would you believe the only Superman movies I saw were with Christopher Reeve?

Well, that's disappointing it isn't as great as expected! I'll probably wait for the dvd now!

Thank you for sharing, actually I never watch any Superman movies and I think I should now!

I will probably go to the cinema to see this new superman; I love the actor, he is so handsome. Kisses, Adam:)

Good idea... skip III and IV. The original Lois was interesting, the one in the 2006 movie wasn't at all. The same goes for the guy who played Supe. I would've called this movie Superboy. Oh and Kevin Spacey was such a miscast.

That said, the effects were convincing. It just wasn't an original story and I'm not looking forward to seeing the Gladiator in the new Superman movie.

I must to watch this film! Cool!

I haven't seen that, but i just watched the man of steel yesterday and i guess that's the bets superman movie ever

I agree with every single thing you wrote. I'm a HUGE Superman fan, and this movie did not live up to the hype:(