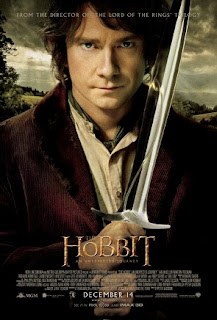 The film starts out in the Shire as Bilbo Baggins is writing to his nephew Frodo about his adventures in his youth. It then goes back 60 years where Gandalf The Grey first meets the hobbit Bilbo Baggins. He informs the hobbit that he must help a group of Dwarves to reclaim their kingdom which was taken by a mighty dragon.

Despite some hesitation, he agrees and they all set out for the long quest. However the journey will be difficult as danger lurks around every corner. A group of Orcs are hunting the group in revenge of an earlier war, dark forces are slowly taking over the forest, and they encounter more foes than friends.

Overall I enjoyed The Hobbit: An Unexpected Journey but I'm  really wishing they had just made two movies instead of this trilogy. The Lord of The Rings had to make unfortunate cuts, but this one ironically adds more to the story like Gandalf meeting with Saruman and Elrond. I will of course see the next two movies, but I didn't enjoy this (at least this first piece) as much as the Lord of the Rings movies.
Posted by Adam at 10:25 AM

Email ThisBlogThis!Share to TwitterShare to FacebookShare to Pinterest
Labels: Ian McKellen, lord of the rings, movie review, the hobbit, Tolkien

well, I haven't watched that, and it's just that im not a LOR fan haha

Iam not a fan, either but I think you wrote pretty well Adam!

Yeah it was not as good as the other ones, you can tell they are just stretching them out for money

It's the worth thing that a Hobbit like me could see !!!
I definitively hate P.J. and Hollywood marketing !

I still haven't even seen LOTR yet! And that's Hollywood for you. Always making trilogies to squeeze more money out of the movie goers.

Guess I am just not a movie goer as I did not see this either.

I love both sagas, this one of the Hobbit and the previous one "The lord of the rings". Very good subject and complete. I love it.Kisses:)

it had lovely moments and true delight from time to time, but overall it was overly long and boring,especially in the scenes with Hobbitses and Dwarfs :) The second one might be better since it has tones of Elven delight :)

thanks Dezz for your "nice" comment about the "hobbitses" (what's that?)!
I will have my revenge!
Choose your weapon, Sir !

I'm so excited, I must see this movie, because I haven't seen it yet :)