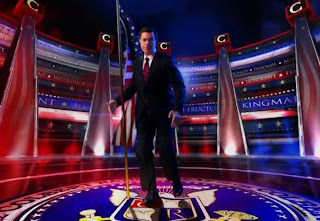 I remember seeing Stephen Colbert on the Daily Show many years ago from time to time. I didn't watch The Colbert Report when it first came on television but now I can't get enough of it. 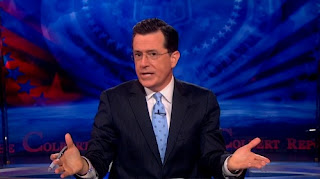 Stephen Colbert uses satire and often styles his speech and manner in the same fashion as conservative television hosts like Bill O'Reilly. His sarcasm and humor mixes quite well, and gives his character more flexibility when trying to make a joke. In a time of boring news, the Colbert Report can be a bit stale. But during a time of bitter politics, it's hilarious and brilliant.
Posted by Adam at 5:00 PM

I think I saw him on whose line is it anyway back in the day,but that was about it

The older version of TV programs were much better tan today's. I rarely watch TV. Nothing good.

I've only watched a couple of times, but both my kids know him very well, particularly my older daughter! Yes, he can be hilarious.

too bad I didn't seen his show

I haven't ever watched it. Sounds interesting though!