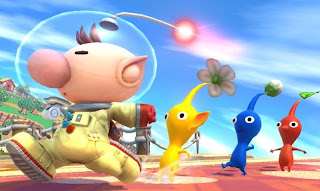 While Super Smash Bros. Melee contained the entire cast of the original game, Brawl sadly left out some characters from Melee, some of which were my favorites. Now with the newest Super Smash Bros. game, logic would say that not everyone will return. But Captain Olimar of the Pikmin series will not be one of them. Which isn't terribly shocking especially considering the news broke right before Pikmin 3 releases on Wii U.

Though I hope Olimar is a good bit better this time around. I found his moves and powers very awkward in Brawl. Not the worst character in the game, but far from my favorite. Hopefully they will add some imagination they've already shown in Pikmin 3.
Posted by Adam at 11:55 PM

they need to bring game and watch back, and forget that stupid train er, dumbest character ever. Pikmin guy meh.