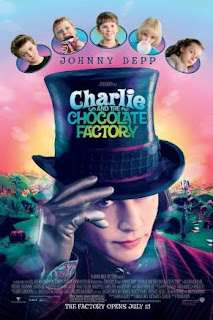 Back in 2005 I knew well about the second movie based on Roald Dahl's classic book. Though the first film from 1971 was one of my favorite movies of all time. I was rather upset about how much different this movie was, but it's easier to understand that this is not a remake of the first film. Tim Burton actually got personal approval from Dahl's widow (Dahl hated the first film) to make a film a bit more true to the original book. 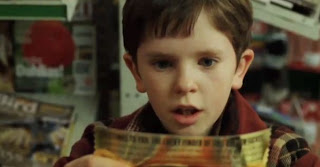 For those who hadn't read the book or seen the first movie, the story is about the same. Willy Wonka is a great candy maker, but closed down his factory to protect his inventions. He returns a few years later with a factory that churns out fantastic inventions, but apparently has no workers coming in or out of the factory each day. Wonka announces a contest where five lucky people will find a golden ticket in a Wonka bar and get a personal tour of his factory along with more candy than they can dream. 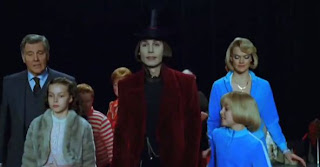 A boy named Charlie Bucket finds the last golden ticket and joins four (rather rotten) brats to see Mr. Wonka himself. When they see the factory for themselves they are amazed at its wonder and magic. But their bad behavior eventually lands them into a deep comical mess.

Overall if you compare Charlie and Chocolate Factory to the 1971 film, then you could have some bitter views. It's better to look at it as a Tim Burton twist on the original book. Since it's not exactly a musical this time around, the Oompa Loompa scenes aren't as impressive as the legendary songs from the first movie. While Johnny Depp's version of Wonka is nothing compared to Gene Wilder's, he did a much better job that I expected. If Roald Dahl was still alive, I think he would of approved of Tim Burton's take on Wonka's candy factory.
Posted by Adam at 12:00 PM

Not familiar with either of these movies, but really a real choc-late factory once.

I haven't seen the movies, Adam; but I read the book to my third graders a number of times. Have you read the BFG? I think that's my favorite Roald Dahl novel.

I haven't seen this one, but I saw the one with Gene Wilder. That one was weird, to be sure ("I said, 'Good DAY, sir!'"), but this one looks creepy.

I LOVED the remake! Tim Burton is one of my all time favorites, and his twisted humor is fascinating to me. I actually don't like watching the first one now!

I have seen them both, and enjoy both, but I like the book best of all.

I'm a fan of the book and the old movie. The old movie had really bad special effects but I think it's more poignant. Over all I liked the old movie better. But the new one isn't so bad. I'm a fan of Tim Burton and you can kinda expect it from him to put a twist at any works that he does. Plus I think the kids at the new movie were better.

Have heard of the movie but not seen.