Fact of the Day: Cretaceous Park 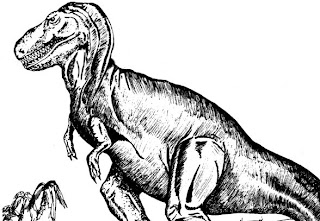 While the T-Rex is synonymous with the movie Jurassic Park, the mighty dinosaur did not live in the Jurassic time period. It actually lived much later on in the upper Cretaceous period. It was also one of the last non-avian dinosaurs to roam the earth until the Cretaceous–Paleogene extinction event 66 million years ago.
Posted by Adam at 12:00 AM

Thanks for this fact for the day!
Have a nice weekend Adam:)

Must have been very impressive. Thanks for sharing this fact, Adam. Have a nice weekend. Greetings, Joke

I know I know everywhere is a lie))) (movie)
http://afinaskaterblogspotcom.blogspot.ru/

There are so many mistakes on films.They should take care about this. Kisses, :)

I didnt know that!! I was wondering, where do you get all that information from? :) Are you just really smart or is Google your best friend? haha

I had no idea. Thanks, Adam. Happy Saturday!

Really ? I love Dinosaur !
Have a nice weekend :)

What? Jurassic park didn't get it right? My whole world crumbled lol

Great!!! I love this world of dinosaur

well at least they can blame the source material. Jurassic park is based on a book of the same name.

By adding them in, it made the movie more interesting. This is one of the dinosaurs that fascinates me.

i've heard this before.